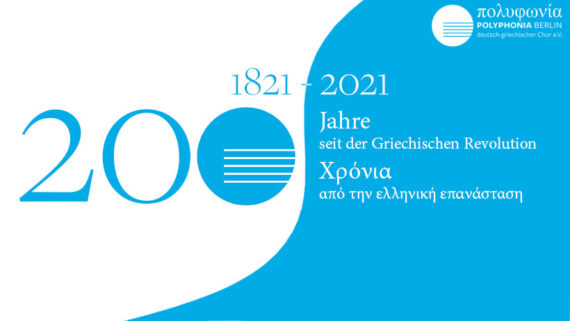 200 years ago started on 25th May 1821 the Greek Revolution against the Ottoman Occupation that had lasted for almost 400 years long. The Revolution resulted in the birth of the Greek State and was supported by international fight given by the large movement of Philhellenism, Big part of which were many volunteers from Germany. Polyphonia and Nikos Mandalias chose the song Tsamikos for this anniversary. A song full of symbols, a hymn to Freedom. The barren, rocky, inaccessible mountain landscape (κακοτράχαλα βουνά), the refuge of the fighters, is celebrated as a sacred place and symbolizes the freedom and the years of the liberation struggle of the Greeks against the conquerors, accompanied by music and dance. A fight, which is described as a fest (πανηγύρι). The son refers to historical figures since the 10th Century and the Byzantine Era until the years of the Revolution (Nikiforos, Digenis, the Son of Anna Komnini, Nikitaras). A small country (μιά φλούδα γης), blessed by the God, fights for its freedoms against the cunning enemy (τσακάλι) and the big forces of this world (αρκούδα). The deep faith in God offered to the freedom fighters the strength for the victory (κριτής και αφέντης). 1821-2021 das Game Polyphonia @Facebook | Polyphonia @YouTube Tsamikos Music: Manos Hatzidakis Lyrics: Nikos Gatsos Dr. Ursula Vryzaki: conducting, piano Nikos Madalias: bouzouki, guitar, baglamas, percussion, studiobe editing Alkistis Kafetzi: Video Editing